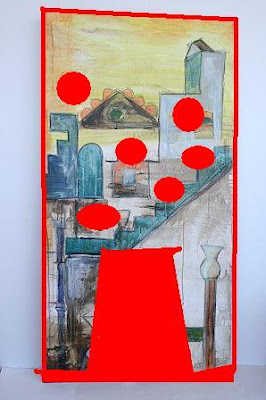 Last night I had a dream where a friend of mine was curating a "big" art show at the local grocery store. I thought it was a rather strange place to have an art show, but agreed to show my work. My friend hung the show. I went to go see how the paintings were hung.

One of my paintings was hung above the tomatoes in the vegetable section of the grocery store. My friend said the painting looked funny above the tomatoes, so he went ahead and "fixed" the problem by re-framing the piece as shown to the left here. He also decided the painting would look better with a few red tomatoes on it. He went ahead and painted them in. I was aghast, and couldn't figure out why he'd done it. I started to get really angry, and he said he didn't really understand what the big deal was.

At that moment, a large semi truck full of paintings arrived. The truck was up on a 25 foot ledge above us. A man slid open the rear door on the semi and asked where the paintings should be placed. My friend shouted to the man to just throw them off the ledge into a pile. I started to protest, but the paintings started falling and crashing onto the floor. Some of the paintings were very large, and on hitting the concrete floor exploded into many pieces. Many of the paintings being thrown off were my friends. I started screaming at him, "you're so disprespectful of art. What the heck's wrong with you?" He just laughed and said, "They're just paintings. What's the big deal?"
Posted by Deep at 2:26 PM